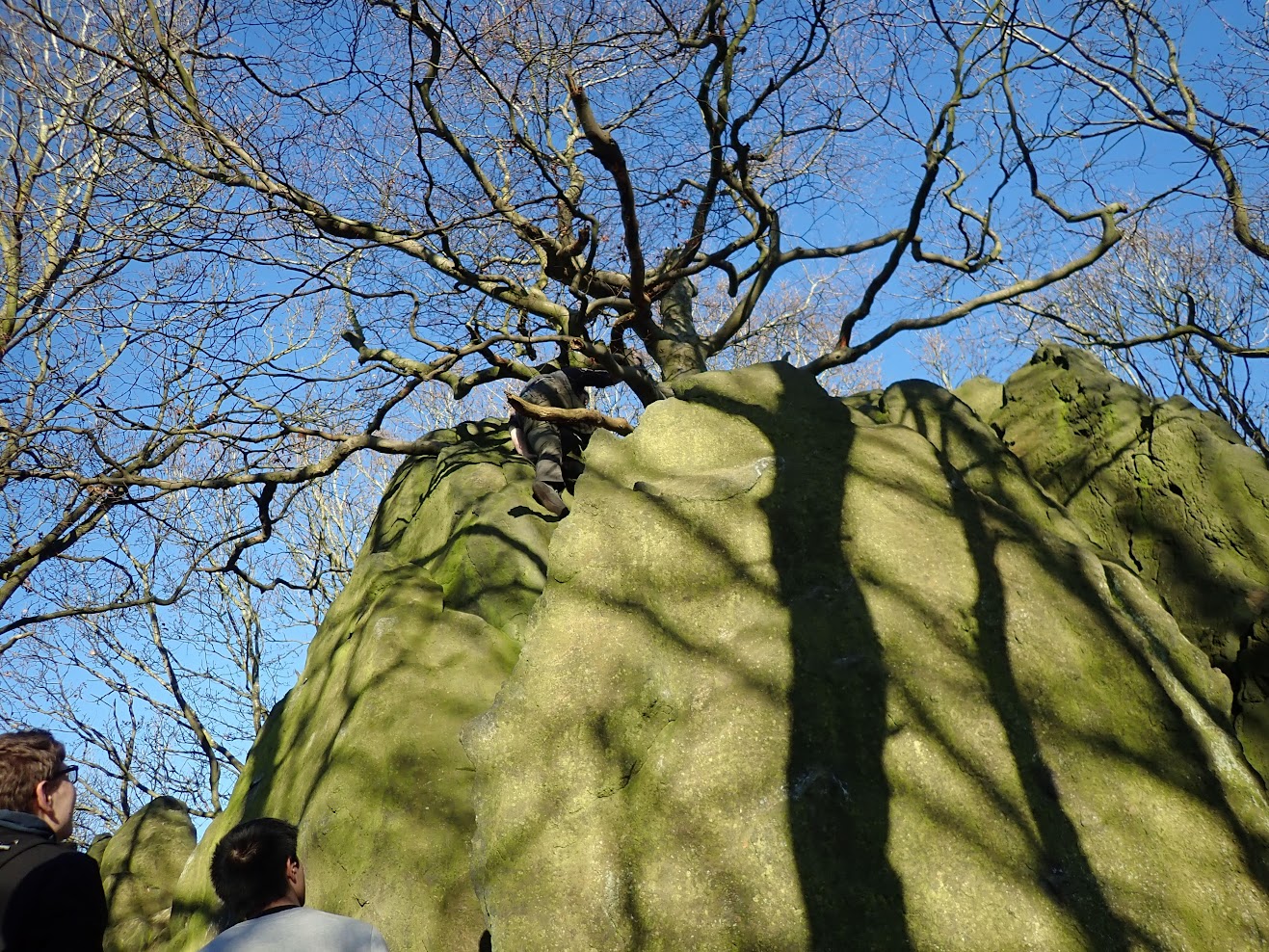 This tree provided a natural extension to a simple problem! 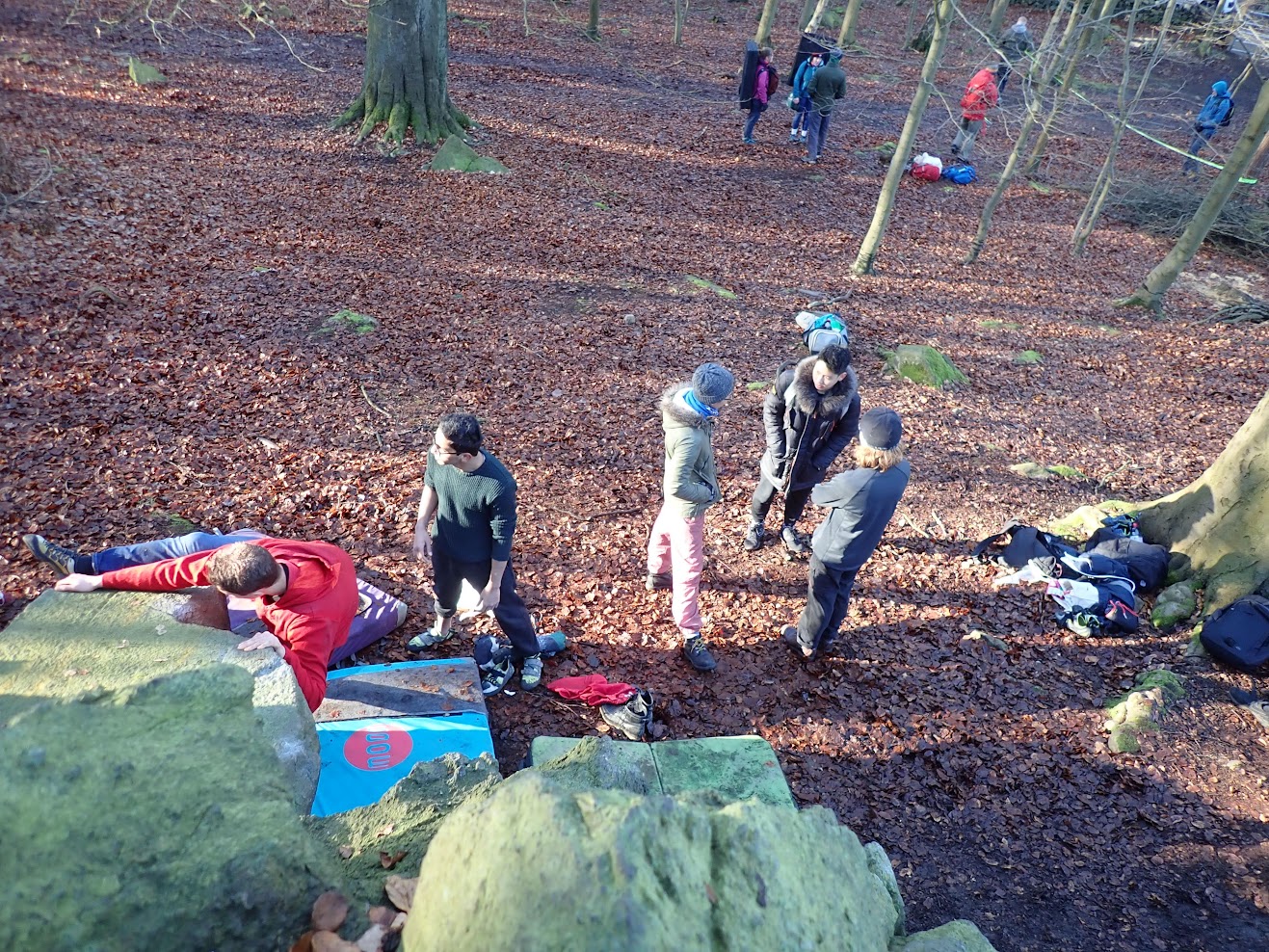 The club enjoying a range of activities!

Yesterday I went on my first ever outdoor bouldering trip! We travelled to Cademan Woods, a long-extinct volcano in north-west Leicestershire.

The day began with a challenge - fitting twelve bouldering mats into the car! Fortunately this was accomplished and with the mats for company, I set off for the Woods.

It was quite a cold day but after a quick warmup, we jumped onto the Pirate Block and attempted a couple of 3+ problems (in the Fontainebleau grading system), Easy Cracks and The Ramp Direct followed by a 4+ problem, The Ramp. These routes were somewhat challenging but quite satisfying!

We then moved to Cavalry Rock where there were a number of more challenging routes. After several attempts I completed the 5+ Top Traverse, which was a really fun route which went surprisingly high up! Around the other side of the rock I attempted a couple of 5 graded problems, Whale Fin and Whale Arête, though was only able to complete the ladder due to a broken hold.

We then moved on to The Pillars where there were a number of interesting problems. I attempted the grade 5 Not So Thriller but struggled with the seated start; I then tried the neighbouring grade 5, The Pillar and managed to complete it! After completing the nearby grade 4, Slice, I was done with this area and, after a bit of slacklining, led a group of the less experienced boulderers over to Twentysteps Area.

This was quite a high outcrop of rock and many routes had been given Trad grades. Nonetheless, we put the mats down and set about trying some of the routes that were there!

I first attempted Detached Wall Left but was unable to do it with the seated start (6a with, 3 without). The route was still quite fun and felt rather more like scrambling than bouldering! Next up was the excellent 4+ Detached Block Wall, rightly deserving its two star rating.

Some of the others had been trying Right Arete and I noticed a tree growing at the top of the route. I suggested that the route may be extended quite easily by climbing to the top of the tree which many of us then did - it made for some excellent photographs! Finally we sent the Diff graded Twentysteps Chimney and Twentysteps Arete which were straightforward but fun routes.

With daylight fading we headed to Hobgoblin where there were some lower graded but recommended problems. I first sent the 3+ Hob Pocket which was a very fun problem, and then sent the grade 5 variant Empty Pocket which involved avoiding the (very obvious) hold entirely. These were very fun slab problems and it was satisfying to have done some good grade 5 and 5+ problems throughout the day!

The day was great fun, though unfortunately we did not linger long at the inimitably named Brap Ya Mum. My first experience of outdoor bouldering was a good one and I will definitely do it again! The Cademan Woods were an excellent spot - not too far to travel, with lots of both simple and challenging problems.